A lot of people suffer from accident injuries because of car collisions. These may have been caused by negligent, careless, reckless, or impaired drivers. No one would want to get involved in a car accident case. However, the fact remains that accident victims would have to move forward from the incident and instead work on a personal injury claim or a personal injury case.

While the party who has no fault may eventually be compensated, it cannot reverse any fatality, bodily injury, emotional distress, or pain and suffering caused by an auto accident.

The most common causes of automobile accidents that lead to serious injuries are: disregarding the speed limit, driving while intoxicated (drunk driving), driving under the influence (DUI), texting while driving, and drowsy driving. If you are involved or injured in a car accident, seek help from the police and call your personal injury attorney right away. A car accident attorney will help you file an accident claim, which is crucial to get compensation for medical bills and property damage. 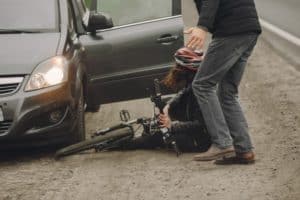 A vehicle crash may also involve multiple automobiles. Witnesses and pieces of evidence are necessary when proving who is at fault in the car collision. This will also determine the insurance company that would compensate for the damages caused by an accident. Given that there are factors that must be considered to know who will be held liable for the collision, this can be easier said than done.

In any form of vehicle accident, the one at fault is whoever has been reckless or negligent. It may be one or more drivers. The form of collision may be one way to assess the car accident case.

For example, a rear-end vehicle crash is typically the responsibility of the motorist who hit the back of the other vehicle. This happens when a driver fails to stop in a piled-up car collision and strikes the rear end of a car in front.

In a piled-up automobile accident, it is common for other drivers to also be at fault. This is because drivers are supposed to maintain a reasonable stopping distance so there would be enough space to stop if a car in front slows down. If there is not enough space for one vehicle, that driver might also be considered at fault unless it can be proven that there are malfunctioning brake lights, which would make it impossible for the driver to realize that the car in front is slowing down.

Take note, however, that it is possible that only the first one to reach the rear of another vehicle will be considered at fault. In some instances, despite likewise hitting the vehicle in front, the other vehicles could be deemed to have no-fault. For car crashes that happened at the back of the vehicle, there are often exceptions to the liability of the driver who hit another car from behind.

Car accident insurance providers will have to assess the degree of negligence and liability on each of the drivers involved. The motorist who hit the back first might be more liable than others. In West Virginia, if someone is more than 50 percent liable for a car wreck, that individual cannot recover damages. The number of damages will likewise be decreased for any proportion of fault that is less than specified in WV laws.

In-car accident cases, it is necessary to collect all possible shred of evidence: photos of the vehicles involved, debris, or even skid marks. Gathering statements from the passengers, drivers, and pedestrians on the scene would also be a great help in auto accident cases. The actual damage to the property may also help assess what happened. It is also important to have a copy of the report from the police. If a citation is issued to one of the drivers, this may help determine the fault.

Hire an experienced accident lawyer from a law firm specializing in personal injury law. A personal injury lawyer at Ghaphery Law Offices, PLLC will help you file an injury claim and fight for your legal rights. Call us at (304) 230-6500 for a free consultation.