It is unwritten knowledge that distracted driving is very dangerous. In fact, I think we have all had some close encounters in our lifetimes. However, that doesn’t stop a lot of people from texting while driving, does it?

A recent study by the National Highway Traffic Safety Administration has revealed that most of the drivers they interviewed admitted to answering calls at least a fraction of the time while behind the wheel and continued with their call without stopping the car.

What is Distracted Driving?

Distracted driving has been defined by the NHTSA as any attention that diverts your attention from the act of driving itself which includes eating, drinking, talking, texting, and using entertainment and navigation systems.

The administration also notes that among all these, perhaps the most powerful distraction is text messaging on a cellphone while driving since the act can steal a driver’s attention from the road for at least 5 seconds.

On the other hand, the U.S. Centers for Disease Control and Prevention says that every day, around 9 people are killed while more than 1,000 people are injured in car crashes due to distracted driving. They classified distraction into three groups: 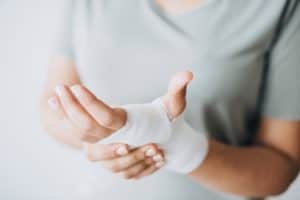 Knowledge of driving safety laws is important to us because we believe that roadway conditions are a matter of national safety. Help us keep our roads safe and avoid the use of cellphones and other electronic devices on the road. If you have any other questions about road safety laws and other personal injury cases, don’t hesitate to approach our Wheeling, WV personal injury attorneys at Ghaphery Law Offices, PLLC. We are a Wheeling, West Virginia personal injury law firm dedicated to protecting your rights.

Of course, it comes as no surprise that young drivers tend to be the most distracted while driving. A study by the AAA Foundation for Traffic Safety has revealed that in the motor vehicle crashes involving teen drivers between 2007 and 2015, 59% of the crashes involved some form of distracting behavior six seconds before the crash. The leading cause of distraction was talking to passengers and using cell phones while driving.

It was noted that using cell phones increased the number of crashes as compared to simply listening or talking. Using a cell phone was involved in 28% of road-departure crashes while talking and listening was at 4.4%.

Using a cell phone was involved in 19% or rear-end collisions while talking and listening was at 1%. The researchers concluded, impaired attention “due to cell phone use appears to be much more prevalent than is reflected in official government statistics derived from police reports.”

These numbers seem high and rightfully so. The highway traffic safety administration recognizes that texting and driving could be just as dangerous as drunk driving, which we know has already caused too many fatalities. This is why government agencies have been pushing for more highway safety through texting and driving bans.

West Virginia has been the 36th state to recognize cell phone use while driving as a primary offense. Motorists will no longer be able to use any electronic communication device unless it has hands-free features which allow motorists to keep their hands on the wheel.

This regulation prohibits the use of hand-held devices such as telephones, personal digital assistants, electronic games, and laptops for motorists. This excludes, however, emergency workers such as firefighters and medical technicians, civilians reporting an emergency to the appropriate authorities, and school bus drivers that use radios.

Since this has been declared as a primary offense, a police officer will be legally allowed to pull you to the side of the road if you are caught using your phone while driving. For a first offense, you will be fined $100, for a second offense, $200, and for a third and all subsequent offenses, $300.

Your first two violations of this code will not be entered into your driver’s record, however, your third violation will be recorded, along with your first two.

These penalties and fines are steep, but hopefully, banning the use of electronic handheld devices will promote safe driving and push for us to have safer roads for the benefit of every motorist and pedestrian.

Now that you know about distracted driving laws, you may be compelled to drive safer on the road. However, this does not protect you from all danger. You are still at risk caused by others’ irresponsibility.

If you have been the victim of other people’s distracted driving, you can and should take legal action for the damages caused. Taking successful legal action often includes being able to prove that they had caused the accidents. This mainly involves proving their distractedness and negligence.

You must also be able to prove that the person was using his phone while driving. You may be able to call witnesses for this or observe for signs that he was on his phone, for instance, if his phone was flung onto the dashboard upon the crash. You should take photos of these scenarios, if possible.

There are also other tactics used by lawyers to prove phone use including scouring through the person’s social media and asking for phone records from telcos.

As a personal injury law firm, we at Ghaphery Law Offices, PLLC are knowledgeable of how to go about accident injury cases. We are experts on the law regarding this, as well as the means to prove that your rights have been breached. Talk to one of our Wheeling, West Virginia personal injury attorneys today.